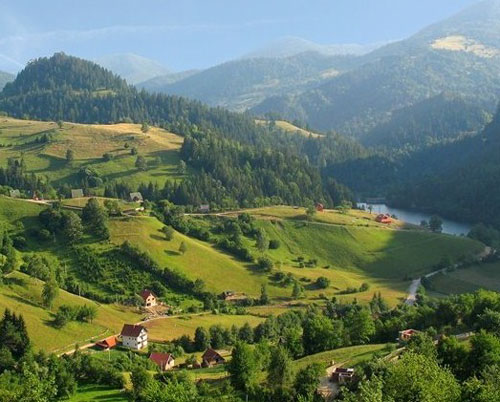 Serbia has a relax atmosphere that will make you want to go back for more. If you want to get in touch with nature you can find a number of calm and enchanting mountains, lakes and healing thermal spas. With so much to see and do, one of the best ways to get around is by car, leaving you flexible to move as and when you please.

Travelling through Serbia can often be an amazing experience, but getting around isn’t always the easiest thing. Driving in Serbia is probably more complicated and chaotic than in your own country (except for someone who is coming from India or some other similar country). Regulations could be different. People are much more aggressive when driving (Serbian drivers have a reputation for fast and sometimes reckless driving). Road rules are frequently ignored by drivers and pedestrians. For you, it is strongly recommended to drive defensively and follow all of the road signs. You need to be very cautious and totally aware of your surroundings. Some parts of the motorway between Belgrade and Novi Sad have two lanes with a hard shoulder on one side only. Some drivers will use the 'middle' lane for passing , forcing other drivers onto the hard shoulder.

Generally it's safe to drive in Serbia, but due to some poorly maintained roads with conditions worse in rural areas, driving could be little bit nerve-racking experience. You should focus on the road and watch for the road bumps and adapt your speed. Much of the public transport is old and overcrowded although there have been improvements in the major cities. In rural areas, roads are often narrow with poor lighting. Be on the look out for pedestrians, farm animals and even agricultural vehicles that may block the road from time to time. The tractors and other heavy agricultural machines travelling at night may do so without proper lights and hard to see.

Road signs in Serbia follow international standards and most are picture signs, not written signs. This actually makes things easier for foreigners because most picture signs are self-evident. Major destinations and routes are signposted in Cyrillic and Latin letters, but sometimes signposts can be stolen (for scrap metal) and it is possible to miss a turn off. Familiarize yourself with road sign symbols before you come and also you would definitively need a road atlas as well as Google maps. You need to be wary of relying on Google maps because it can send you in the wrong direction and you may find yourself at the border with Kosovo or Bulgaria by mistake. Streets are not clearly marked and getting around could be a problem since you will be driving outside of the big cities where the locals mostly do not speak English.

Petrol service stations offer clean toilet and refreshment facilities along the way. Fuel in Serbia is lead free and available in the following octane levels: 92, 95 and 98. Diesel fuel is also widely available throughout the country. Many Serbians have converted their cars to run on propane gas, as this is far more economical than standard fuel. Almost all cars have manual transmissions. Be prepared to drive on two lane roads. Driving is on the right with passing  on the left. Guarded parking places and garages are scarce in Serbia. Wheel clamps are not used, however, if you park your car incorrectly, it can be removed.

In Serbia, traffic law is very strict:
- Adults and children must wear a seat belt, both in the front and in the back at all times.
- Children shorter than 150 cm and younger than 12 years old may not sit in the front passenger seat.
- Children under 12 and shorter than 150 cm should be seated in an appropriate car seat or booster seat in the back.
- Children up to the age of 3 years old must be placed in a suitable child restraint. Child restraints must be homologated and bear the mark ECE R44/04.
- A person under the influence of alcohol is not permitted to travel in a vehicle as a front seat passenger.
- By default, you should always yield to the car coming from your right. Forget of the American rule of “first to the intersection has right of way” rule. Even if you arrived first at the intersection, if there's no yellow diamond sign, you must give way to any cars coming from the right.
- Only hands-free cell phones may be used while driving. You can’t have a cell phone in your hand while driving.
- Horns must not be used in built up areas or at night except in cases of imminent danger.
- Buses must not be overtaken when they stop for passengers to board or alight.
- No turning on red. Sounds simple, but it’s easy to forget that a red means red in Serbia. So no right turns on a red light, unless you have a separate green arrow light.
- You must drive with dimmed headlights on during the day.
- The authorities at the frontier must certify any visible damage to a vehicle entering Serbia and a certificate obtained; this must be produced when leaving otherwise you may experience serious difficulties on leaving.
- Rookie drivers need to have an experienced driver in the car if their driving experience is less than 5 years
- Must wear a crash helmet if you're riding a motorcycle
- Fines are from €100 for smaller violations up to 60 days in prison and €5,000 for causing a larger traffic accident.

It would be hard to say “no” to the local beers and wines at very good prices but it could mean trouble if you are drinking and driving. The drink-driving limit is 30mg of alcohol per 100ml of blood (0.03 per cent). Nil alcohol is permitted in the drivers’ blood for motorcyclists, novice and professional drivers. It’s the best idea for you to not consume any alcohol if you want to drive. You have try to fully obey the traffic law because the police could be very harsh towards foreigners resulting in a very big fines. Police often conduct routine roadside checks where breath-analysis tests are administered. You can’t get away with having a beer or wine with dinner and then driving home. It’s not just a fine or jail, it’s losing your license. A driver who refuses to be breathalyzed is automatically considered to be driving while under the influence. 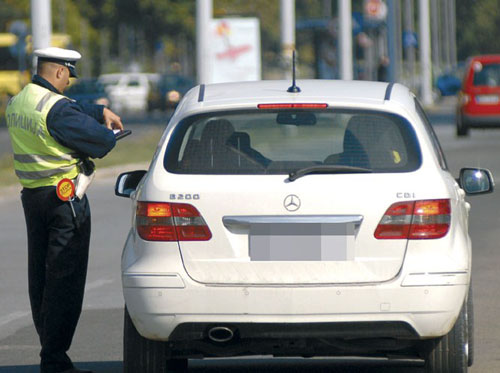 Serbian police may stop you to check your documents (you must carry them on you at all times) or for committing an offence such as speeding, not wearing a seat belt etc. There are many notorious radar speed traps around the country. Oncoming motorists will warn you by flashing their headlights. Speed cameras have now been installed on main routes across the country, so if local drivers all conspicuously slow down you can be sure there is a speed camera or trap up ahead. The use or carriage of radar detectors is prohibited. Speed limits vary across Serbia, so check the signposts for maximum speeds. Generally, speed limits in Serbia are as follows: City 37mph (60km/h) Open Roads 62mph (100km/h) Highway 74mph (120km/h). Maximum speed limit in school areas 18 mph (30 km/h). Drivers who have held their licence for one year or less can drive at 90% of the speed limits detailed above. The conversion from kilometers to miles per hour is 1 km/h = 0.62 mph.

Should you be unlucky enough to be caught, you will get an immediate fine. Generally the traffic police in Serbia are friendly and polite and we recommend you remain likewise. Getting into an argument will only make matters worse for you. Most policemen don't speak English anyway. There are some corrupt police who pulling people over for breaking the speed limit when they were not - and demanding fines. If you are operating a vehicle with a foreign license plate you could be stopped by police and be fined on the spot for offences that you have not committed. There is still some corruption but in general the police in Serbia are still more reasonable than police elsewhere.

Dial 987 for roadside assistance. Other emergency numbers are police: 92; fire department: 93; ambulance: 94. There are tollbooths along the motorways. Foreign-registered vehicles are charged at a higher toll than local vehicles. The toll also depends on the size of a vehicle. You might have to pay motorway tolls around of €200, these are usually payable in cash so make sure you have some.

Compulsory equipment in Serbia:
- A valid, full driving licence - both the photo and paper parts.
- An International Driving Permit (there is conflicting information about the validity of various licences in Serbia. There are reports of almost every licence being acceptable to none. Therefore, it is strongly recommended to obtain an International Driving Permit to accompany you current licence)
- Your motor insurance certificate and V5 registration document or hire car paperwork
- A Green Card - it's a useful back-up to your motor insurance documents and shows you've got the minimum legal level of cover. (The green card is no longer necessary for drivers of total of 33 countries of Europe when traveling to Serbia. Starting from January 2012, the agreement is implemented in the 27 countries of the European Union, as well as in Switzerland, Norway, Island, Andorra, Croatia and Montenegro.). Not all insurers cover driving in Serbia so check before you go.
- A sticker of your country on the back of your car - even if your car has 'Euro-plates'
- If you coming from driving-left-side country you will need headlamp converters (stickers you put on your headlights when you're driving on the right, so your lights don't dazzle motorists coming the other way)
- First aid kit (Type A for motorcycles, type B for other vehicles).
- Warning triangle (two if towing a trailer. Not required for two wheeled vehicles).
- Winter tires must be fitted on the drive wheels of all motor vehicles from November 1st to the April 1st and must have a minimum of 4mm tread. If there is snow or ice on the road this period may be extended.
- Snow chains must always be carried in the vehicle as their use may become compulsory if the International “snow chains” sign is displayed.
- Reflective jacket. The jacket must be worn when exiting the vehicle and should therefore be kept within the passenger compartment of the vehicle.
- Spare wheel must be of the same dimensions and load of those fitted.
- Towing rope or tow bar, minimum 3m (around 10 feet)
- Spare bulbs for your car's external lights
- A fire extinguisher

To rent a car, you must be at least 21 years old (age may vary by car category) and have held your license for at least 2 years. Drivers under the age of 25 may incur a young driver surcharge. You will have to return the car to the same location or face a significantly higher charge - so make applicable plans. Remember that you are likely to get the better prices and the better cars by booking in advance. Here is an randomly chosen rent a car address: http://www.rentacar-beograd.rs/ 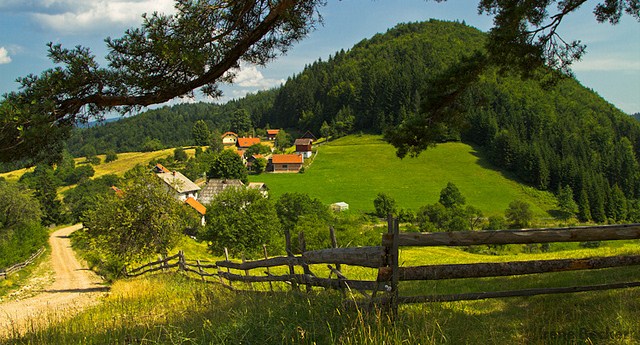